This is the 7th post on OpenGL and Vulkan Interoperability with EXT_external_objects. It’s about another EXT_external_objects use case implemented for Piglit as part of my work for Igalia‘s graphics team. In this case a vertex buffer is allocated and filled with data from Vulkan and then it’s used from OpenGL to render a pattern on screen. 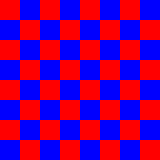 Step 1: An external Vulkan vertex buffer is created and filled with chess board quads

In piglit_init we call vk_init to initialize the Vulkan structs and there we create a Vulkan vertex buffer:

We fill it with quads that would correspond to the white quads of a chess board:

To do so we mapped the buffer’s memory and we generated the quads with gen_checkerboard_quads:

Now the vertex buffer is ready to be imported in OpenGL.

Step 2: The external Vulkan quad is imported in OpenGL

To import the vertex buffer we’ll do something similar to what we did in Part 5 to import the pixel buffer, but this time the target will be GL_ARRAY_BUFFER instead of GL_PIXEL_UNPACK_BUFFER:

After these steps the buffer is ready to be used by OpenGL. (We’ve explained gl_gen_buf_from_mem_obj in Part 5 and gl_create_mem_obj_from_vk_mem in Part 2).

Step 3: Using the external vertex buffer to draw a chessboard pattern with OpenGL

We bind the buffer as GL_ARRAY_BUFFER and we call glDrawArrays like we would call it with an OpenGL allocated vertex array:

We are using gl_prog to paint the vertices blue after we have cleared the framebuffer to red. The vertex and pixel shaders used to build gl_prog are quite minimal:

piglit_present_results shows the chess board pattern on screen.

Step 4: An attempt to overwrite the buffer should return Invalid Operation Error

Just to make sure that the reused vertex buffer cannot be overwritten by OpenGL we perform a check that calling glBufferSubData will return an error:

Then, we clear the framebuffer to red and use the same vertex data to perform another drawing:

At this point, the vertex data should be the ones written by Vulkan and piglit_present_results must display a red-blue chess board pattern.

This test case was written to validate that we can create and fill a vertex buffer from Vulkan and use it to render with OpenGL. But also to see that we aren’t allowed to overwrite the external vertex buffer’s content from OpenGL!

Next post will be about using an external vertex buffer to draw once from OpenGL and once from Vulkan to make sure it can be re-used several times. Stay tuned!