This is the final post of the series where I explain the ideas I tried in order to improve the upsampling of the half-resolution SSAO render target of the VKDF sponza demo that was written by Iago Toral. In the previous posts, I performed experiments to explore different upsampling ideas and I explained the logic behind adopting or rejecting each one. At the end, I’ve managed to find a method that reduces the artifacts to an acceptable level. So, in this post I’ll try to present it completed and in detail.

An overview of the initial problem

In his VKDF sponza demo, Iago, implemented screen space ambient occlusion among other visual effects [1]. As this technique is expensive, he decided to optimize it by rendering the result in a lower resolution render target (texture), which he then upsampled to create a full resolution image that he blended with his original one to display the result. For the upsampling, he used the built-in GLSL texture function once with a sampler that doesn’t perform any filtering (VK_FILTER_NEAREST) and once with a sampler that performs linear sampling (using VK_FILTER_LINEAR). In both cases, the artifacts in the full resolution image were too many.

In my previous posts I described the experiments I’ve ran in order to find an efficient upsampling algorithm to reduce the artifacts of the high resolution image.

What was exactly the problem with using VK_FILTER_LINEAR and VK_FILTER_NEAREST?

An approach to solve this problem

The method I’ve implemented after performing several experiments that you can read in the previous posts (listed at the end of this post), was based in the following idea:

When using the upscaling pixel shader (where we upscale the SSAO texture in order to calculate the fragment AO color) we observe many artifacts in the regions where the samples of each (2×2) neighborhoods lie in different surfaces. But when the samples lie in the same surface the linear interpolation works very well because averaging the colors gives a nice smooth appearance. As the texture2d lerp happens to be very fast, we’d like to keep it for the surfaces. But for the neighborhoods with surface discontinuities we’d rather use a better upsampling algorithm, like a depth-aware one, for example nearest depth. The depth-aware sampling algorithms, use depth information from the z-buffer in order to select a color from the SSAO texture for the fragment. This information can be valuable in regions with surface discontinuities, as it can help us select the most representative color for an “edge” or a “corner” and avoid the artifacts we’d see by averaging the colors of 2 different surfaces (case of VK_FILTER_LINEAR sampler) or by selecting the closer color sample to the fragment that might lie in the “wrong” surface (case of VK_FILTER_NEAREST sampler).

Let’s see the method in detail:

Remember that we have a half-resolution texture with the SSAO color output and we need to calculate the color of each fragment that will be written in the full-resolution image. In order to find this color, in the upsampling pixel shader, we need to operate in the samples of each 2×2 neighborhood of the low resolution texture.

Distinguishing the surfaces from the discontinuities

In order to decide if the samples of each 2×2 neighborhood of the low resolution texture belong to the same surface or not, we need information from the normals that correspond to these samples.

As the normals have been calculated for the full resolution image, we need to have bound a downsampled normal buffer for this step where the normals are quite representative of the original ones that would correspond to these samples. We will see how we can perform this downsampling later. For the moment, let’s just assume that we already have a normal buffer of the size of the low resolution SSAO render target, and that each normal of this buffer is the normal that corresponds to the SSAO texture sample that has the same uv coordinates.

For each 2×2 neighborhood of the low resolution textures, we calculate the dot products between the normals (3 dot products) and we find the minimum among them. If this minimum has a value close to 1.0 we assume that all the 4 samples lie in the same surface otherwise we assume that there is a surface discontinuity in the neighborhood.

This is because (as we’ve seen in post 3.2) the dot product between 2 normals a and b can be expressed as:

As the downsampled normals are already normalized in this shader:

This equation makes clear that when the samples lie in the same surface (and their normals are almost parallel) the angle θ between every two of them is small (close to zero), and so the dot product takes a value close to 1.0 (because cos0 = 1).

The idea to classify the sample neighborhoods and perform different sampling depending on if they are surfaces or not comes from an article on Call of Duty Black Ops 3 [3]. As we’ve seen in post 3.1 the author performed a similar classification using the depths of each neighborhood. For reasons already explained in that previous post, I preferred to modify his method and use the dot products between the normals instead.

We already said that when the samples lie on a surface, the color is the result of the linear interpolation that is performed by the hardware (weighted average with the weights being the Manhattan distances from each sample, see also the OpenGL Reference sections on Texture Minification/Magnification):

where the sampler performs linear filtering (VK_FILTER_LINEAR) and uv are the texture coordinates.

The effect of using lerp on surfaces can be seen in the following images from part 4 (see the shadows in the red and green quads): 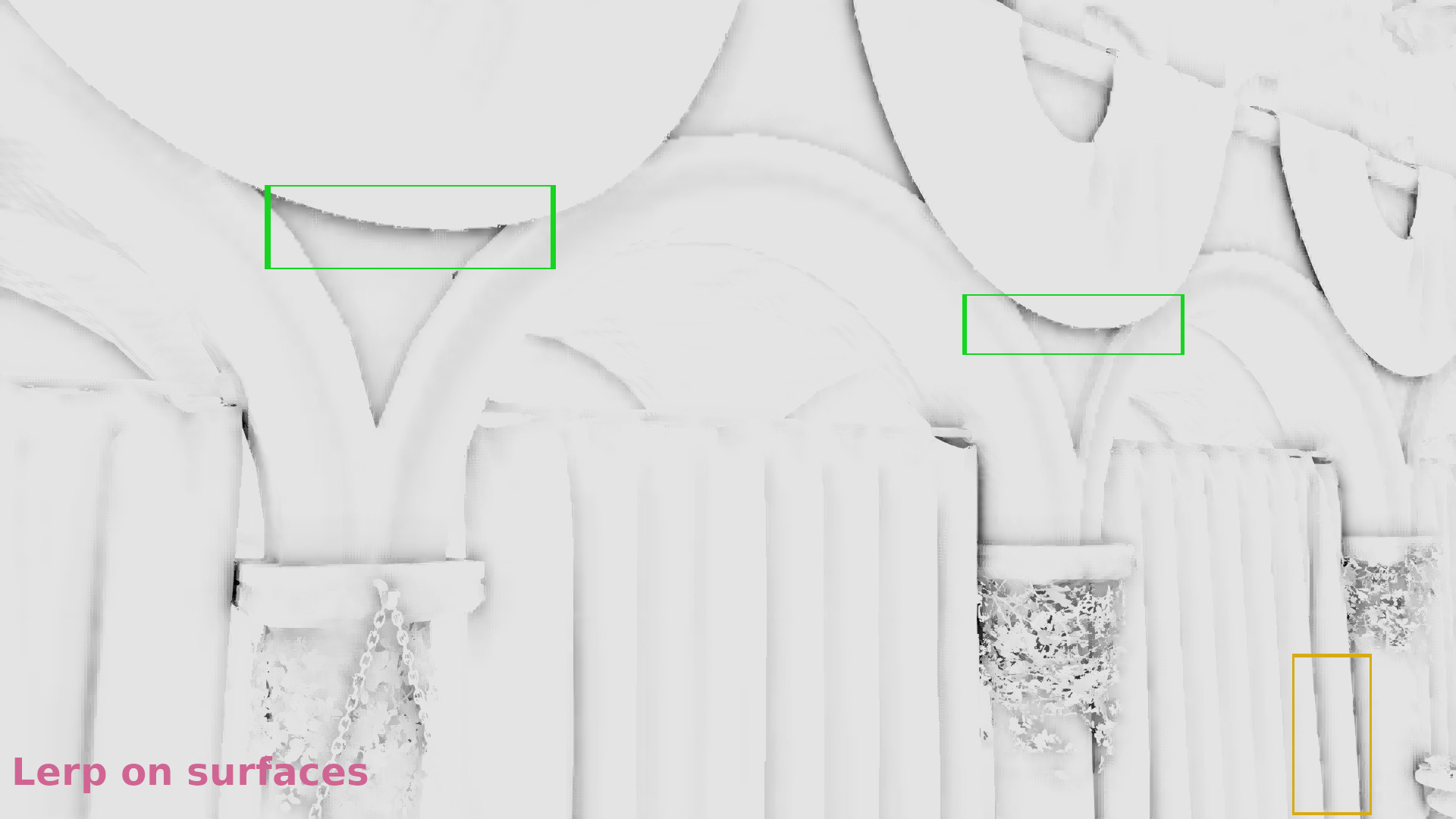 When a 2×2 neighborhood contains a discontinuity, we perform the Nearest Depth algorithm.

In order to perform the nearest depth algorithm for each SSAO texture sample, we need information about its depth. So, here we have the same problem we had with the normals: our z-buffer values correspond to the high resolution image. Which again means the same thing: at this step we need to have a downsampled version of the z-buffer as well that has the size of the low resolution SSAO render target and where the depths are quite representative of the depths that would correspond to the SSAO samples in the same uv coordinates if the SSAO was performed in a full resolution render target.

We’ll talk about the downsampling later, at this point we’ll only assume that we already have bound such a downsampled depth buffer in the upsampling pixel shader, and that we also have bound the original z-buffer.

And so: in every 2×2 neighborhood of the downsampled z-buffer, we find the sample whose depth is closer to the original depth from the original high resolution depth buffer and we select the SSAO texture sample that has the same uv coordinates with this sample to calculate the AO color for the fragment.

At the end of the upsampling part (where we upsampled the SSAO texture by performing lerp on surfaces and nearest depth on discontinuities) we’ve calculated the AO of each frame. The result is something like that:

We can further tweak the discontinuity detection as we’ve seen in post 5 to select a samples classification threshold that reduces any lerp artifacts while it preserves the smoothing: 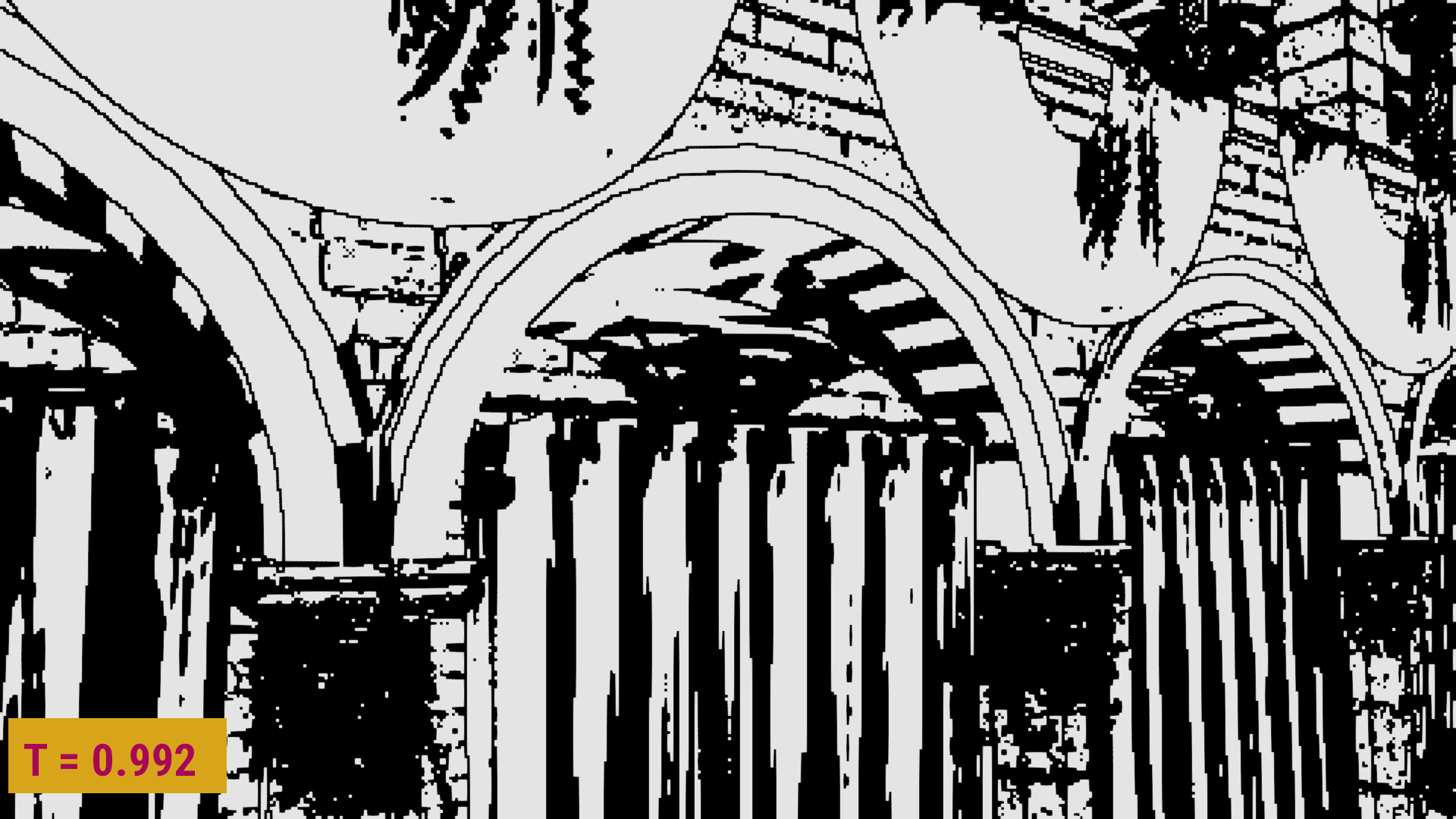 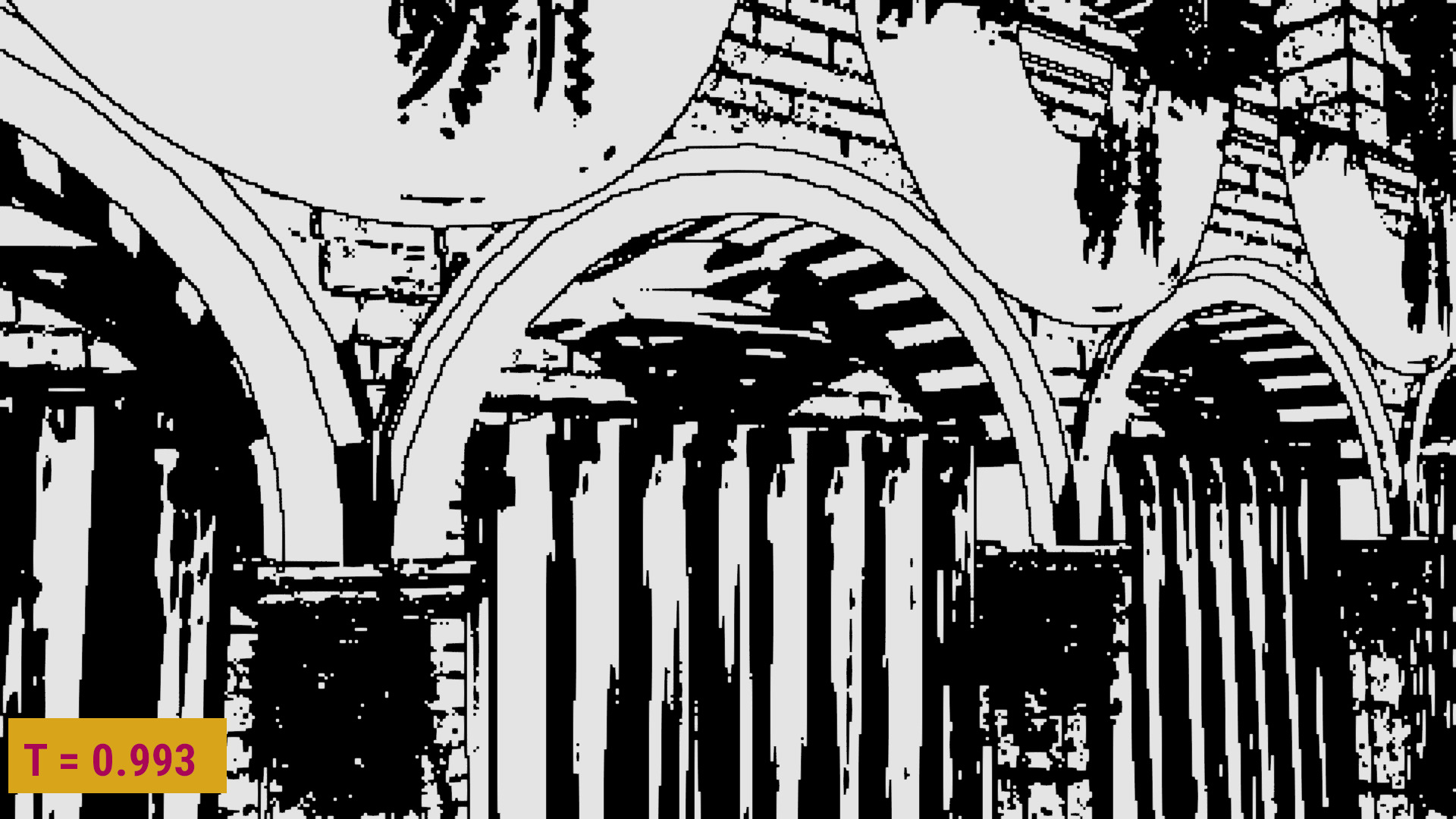 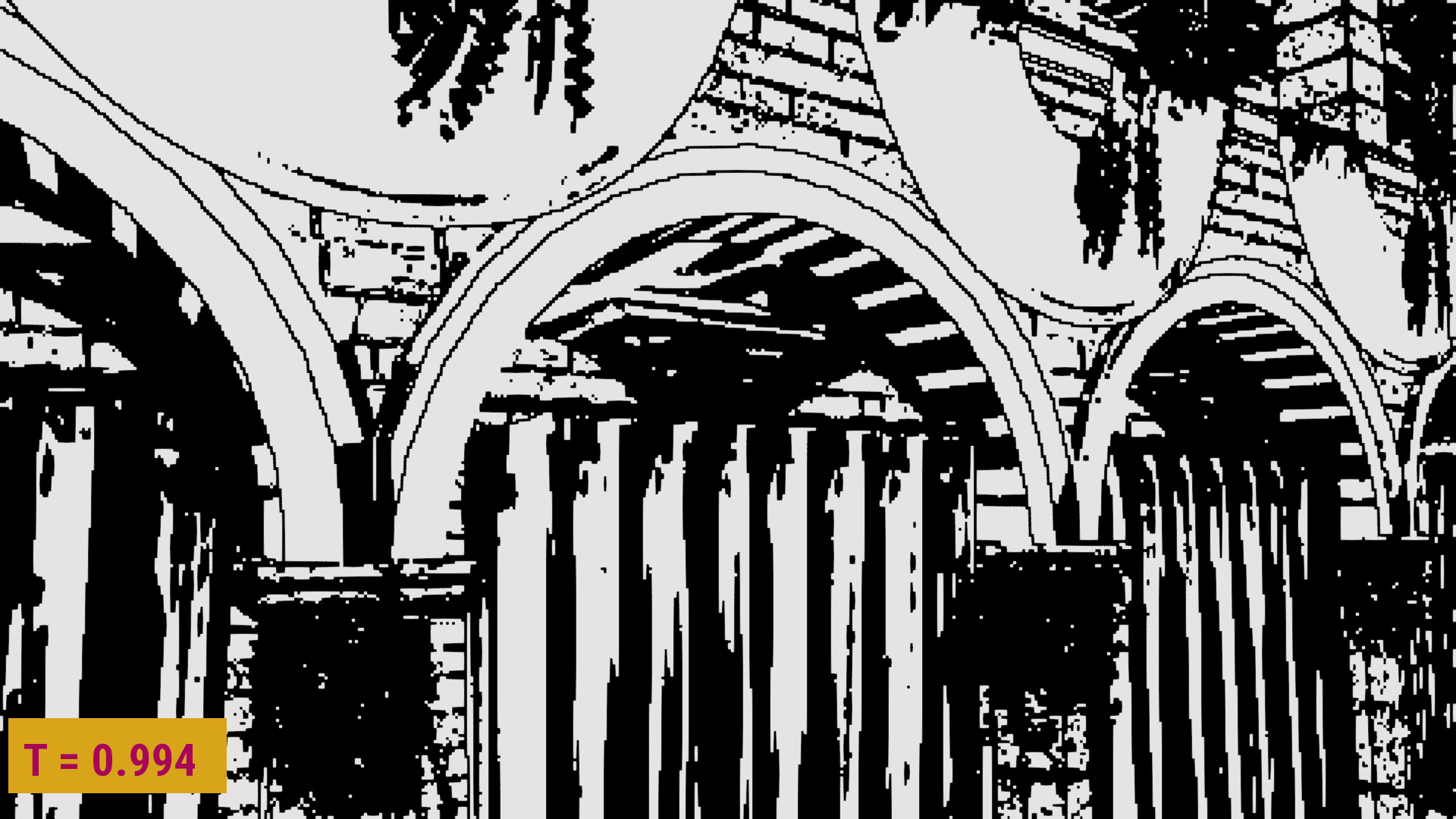 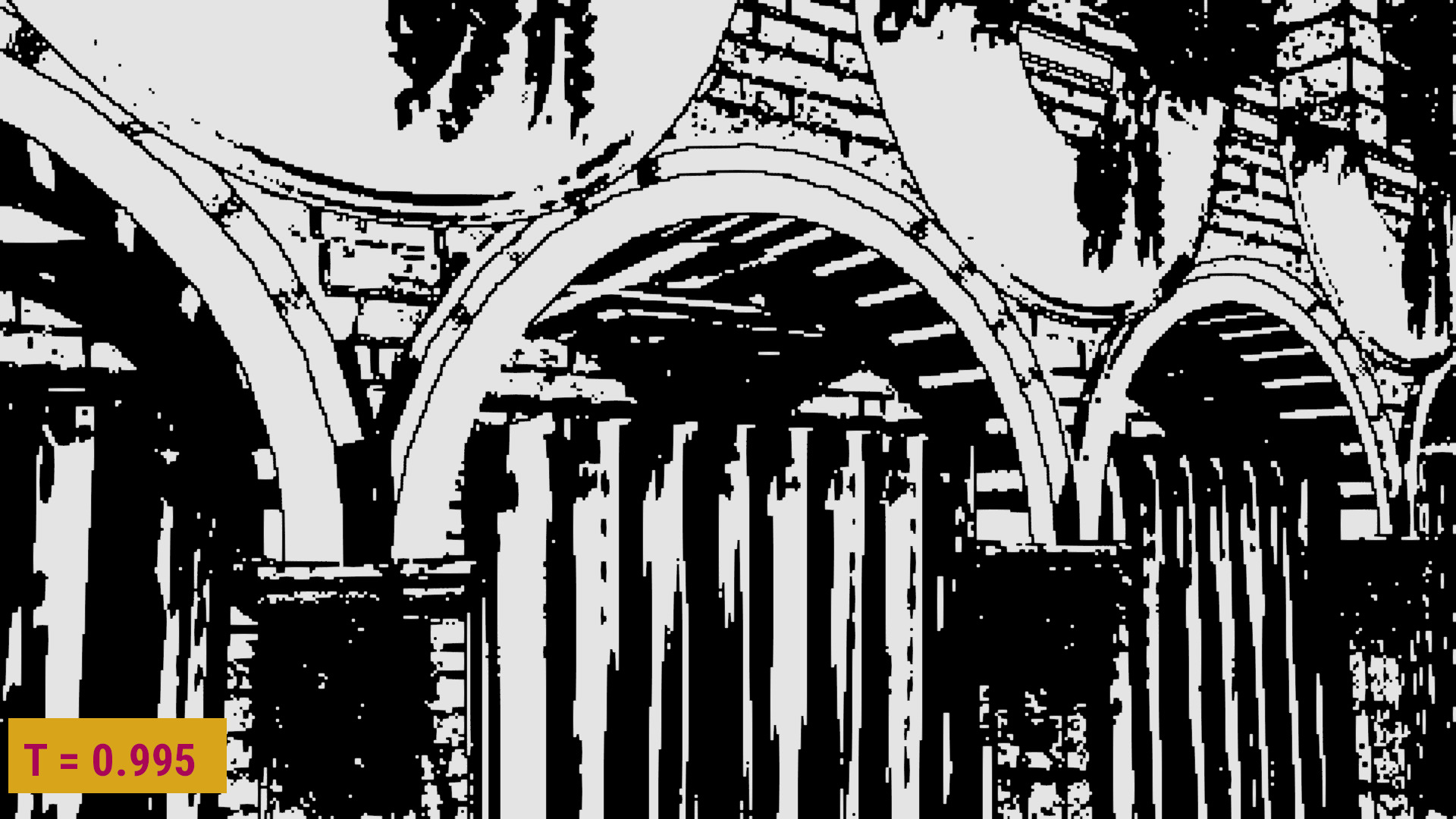 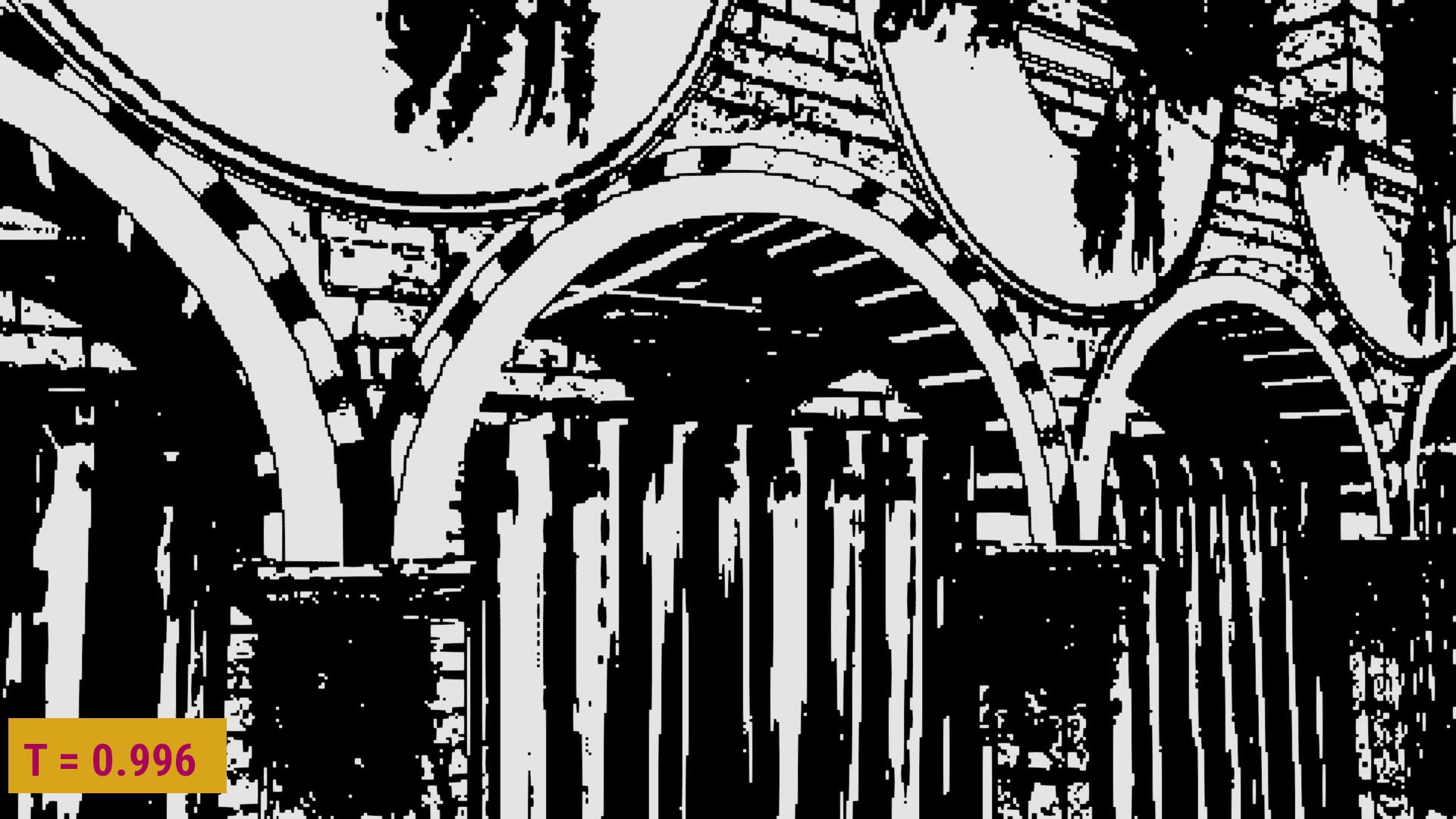 For the sponza scene I had selected a threshold of 0.997 (although in my first comparisons I was using 0.992).

Downsampling the depth and normal buffers

I needed the downsampled z-buffer to be quite representative of the original surface, in order to improve the nearest depth selection during the upsampling step. For the normals, it was enough to select the samples that had the same uv coordinates with the selected depths (see also part 3.2). After having compared different z-buffer downsampling techniques that were selecting the minimum, the maximum or a combination of the two following some pattern (part 4), I tried a completely different approach that seemed to work very well with the nearest depth:

My idea was to select the most representative depth of each 2×2 neighborhood of the original depth buffer by doing the following:

The nearest depth results were improved with this method. Here’s a gallery from part 4 where the AO results from algorithms discussed in parts 1, 2 and 4 are compared to the AO results with this new downsampling method in 1/4 resolution (for the artifacts to be more visible): Let’s first see how the z-buffer and normal buffer downsampling can be performed:

Vulkan side, we need a separate pass that downsamples the two buffers. The vertex shader of the pass just draws a quad, whereas the pixel shader takes as input the samplers of the original depth and normal buffers and performs the downsampling by writing the output colors in one or more half resolution render targets. For performance reasons, I only used one output: a 32-bit (to fit the depth value size) RGBA color attachment, where the rgb color values contained the xyz coordinates of the normal directions and the a values contained the depths. More details in some parameters of the pass can be found in post 3.2. The most important part was that the samplers must use VK_FILTER_NEAREST, as we DON’T want to use any filtering (as we are going to perform the sampling ourselves).

Vertex shader (only renders a quad):

Selecting the most representative samples:

Note that the code is slightly different from what I described earlier: here I select the sample that is closer to the centroid when we have 3 samples as the remaining 2 samples have the same distance from their centroid, so I could safely pick any of them without really affecting the results. (Thanks zrizi for pointing this out in the comments.)

Selecting the right upsampling method using information from the normals of the neighborhood:

There will always be some visible artifacts with every upsampling method, as it’s impossible to achieve a perfect representation of the original image using the half number of pixels. This method I’ve just presented seems to improve significantly the SSAO quality compared to the ones I’ve tried before (see post 4 for more comparisons) and to reduce the artifacts quite a lot, but I suppose that there are many other ideas to explore out there.

And some good news: you’ve finally reached the end of this post and the series!! See you next time! 🙂

Previous posts of the series:

2 thoughts on “Depth-aware upsampling experiments (Part 6: A complete approach to upsample the half-resolution render target of a SSAO implementation)”