This post is again about improving the upsampling of the half-resolution SSAO render target used in the VKDF sponza demo that was written by Iago Toral. I am going to explain how I used information from the normals to understand if the samples of each 2×2 neighborhood we check during the upsampling belong to the same surface or not, and how this was useful in the upsampling improvement.

But before I start explaining these normal based samples classifications, a quick overview of our conclusions so far:

So, in this post, we are going to try the same classification, but this time using the normals instead of the depths for the reasons we have already explained in Post 3.1.

Using the normals to classify the samples

The idea is the following:

In the Vulkan pass that we downscaled the z-buffer (see post 1, post 2), we also downsample the normal buffer by selecting the sample that corresponds to the selected depth.

Then, in the upsampling pixel shader, we calculate the dot products between the normals of each 2×2 neighborhood of the downscaled normal buffer and we select the minimum among them. If its value is close to 1 we assume that the samples lie in the same surface and we perform linear interpolation. Otherwise, we assume that there is a discontinuity in the region and we perform nearest depth.

Why is this necessary?

Let’s see some basic maths:
The dot product of two normals a and b is calculated as:

As the downsampled normals are already normalized at this point:

the dot product equals the cosθ:

The equation above implies that:

So when the minimum dot is ~1 we can safely assume that all the 4 samples lie in the same surface and we should average the colors to achieve a smooth result. In every other case, we can assume that there’s at least one normal with different direction and so there is at least one sample that lies on an edge or on a corner or on a separate surface (depth discontinuity). In that case, it doesn’t make sense to average the colors as we will miss the change in depth, and so we should prefer the nearest depth in order to increase the probability to select the sample that is different from the others.

Let’s see how this algorithm is able to distinguish the edges from the surfaces. With a threshold of: 0.992 (again selected by trial and error) I’ve generated the following image where the surfaces are white and the depth discontinuities are black: 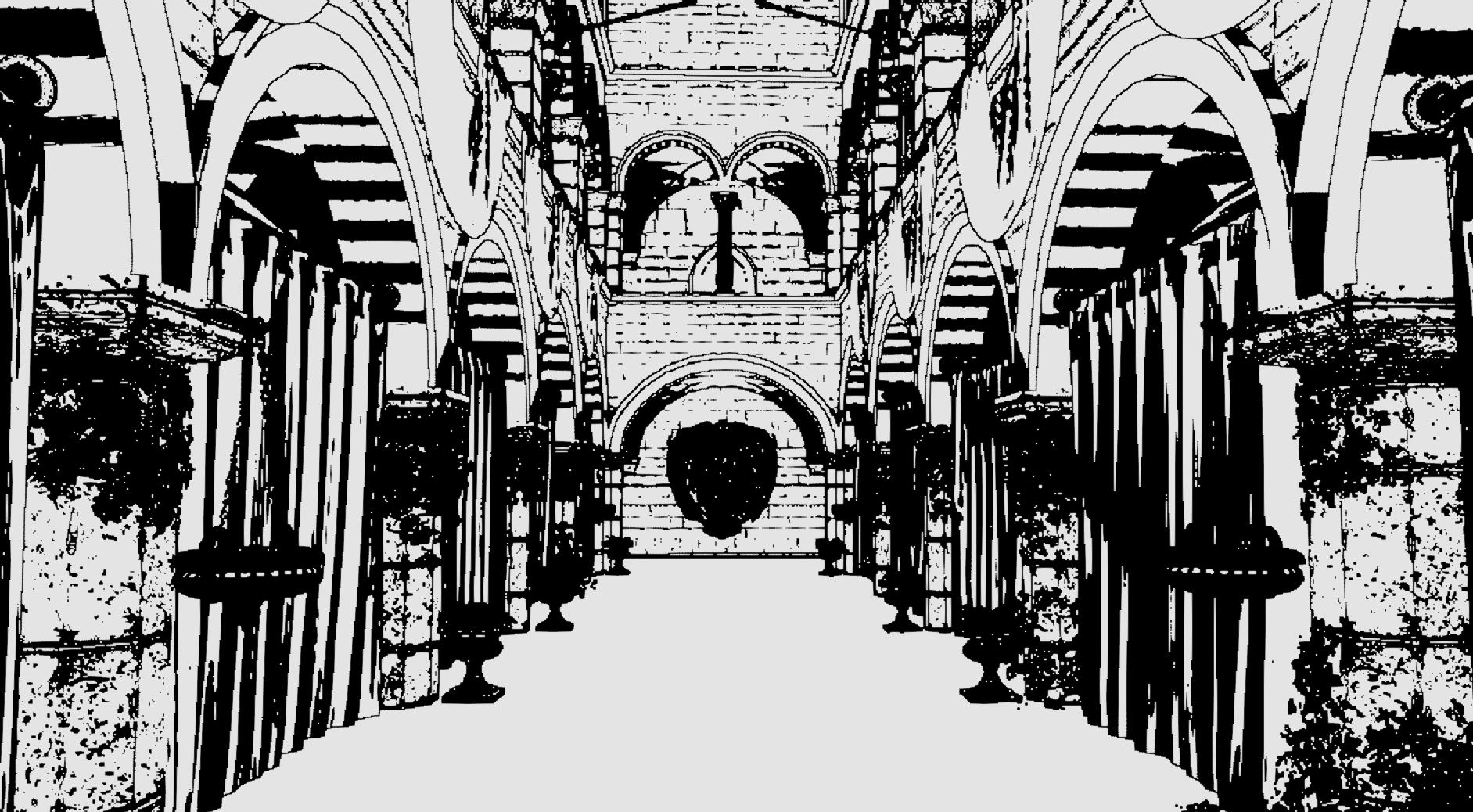 As the goal is to detect as many discontinuity points as possible (and not to achieve the best edge detection) I preferred to have more black regions in order to catch all the changes in depth than more white regions and accidentally ignore sudden depth changes.

As I already have explained in the previous post this “edge-detection”-like result is not dependent on the visible part of the scene at the time I selected the threshold and it does not depend on parameters like the near/far clipping planes positions. Therefore, we can achieve similar results in other scenes, when we move the camera and when we navigate around.

Let’s first see how the algorithm described above would look in GLSL:

Note: In order to sample the SSAO render target once with the GLSL texture function (and perform linear interpolation) and once with the textureOffset (but this time without any filtering as I am doing the upsampling myself by performing nearest depth) I needed two samplers for the same texture in the shader. The first (the ssao_tex sampler2D) was created with VK_FILTER_LINEAR whereas the second (the ssao_tex_nearest) was created using the VK_FILTER_NEAREST. (There can probably be other ways to do the same thing, for example texelFetch doesn’t do any filtering but I prefered to use 2 samplers and keep things simple).

At this point (that I was trying to find a method to improve the upscaling quality) I didn’t care much about performance and optimizations, I only cared about reducing the artifacts. Therefore, I just added an extra color attachment to the Vulkan pass that downscales the Z-buffer in order to downsample the normals. Later, when I finally found a method that could significantly reduce the artifacts (future post), I decided to optimize things a little and pack the depths and the normals in the alpha and rgb values of the color attachment respectively instead of using 2 attachments.

So, in this Vulkan pass, I used as inputs the full-resolution depth and normal textures. The outputs were the downscaled normals of the selected samples in a color texture and the downscaled depths in a depth texture. I then used the downscaled outputs as inputs in the lighting pass and used them to upscale the SSAO texture.

The parameters I used for the color attachment of the depths/normals resize pass (just for symmetry with Part 1 where I shared the ones for the depth attachment) were:

– some render pass options for the normals buffer attachment (size was the size of the SSAO render target):

As I said I could have packed the depths and the normals in one color attachment. In that case I would still use the same parameters I used above for the attachment.

Note: In the snippet above, I used the maximum depth of the neighborhood, but I could have used the checkerboard pattern we’ve seen in Part 2 of the series. The result was similar and you can see videos of both in the playlist I will append at the end of this post.

An attempt to avoid the downsampling and select normals from the high resolution normal buffer using offsets:

One thing I wanted to investigate was if I could avoid the downscaling of the normal buffer somehow. My idea was to select some normals from the original normal-buffer in offsets calculated by taking the SSAO scale into account. That could be easy as the full-resolution normal buffer was already available in the pixel shader where we performed the upscaling and the lighting, as part of the gbuffer textures that were used in the deferred shading calculations, see again Iago’s post.

So my first (naive) approach was to select 4 samples in a distance that depends on the scale around each sample (the downsampling was the same as in Part 1, Part 2, a pass that downscales the z-buffer):

I somehow expected that the quality wouldn’t be the same as with the downscaled normal buffer as these normal samples won’t be exactly the ones that correspond to the selected depth samples of the low resolution z-buffer but some neighboring ones. I was hoping though that it would give an acceptable result, especially where the discontinuities aren’t too many (surfaces) and the normals of the neighborhood are almost parallel. There would certainly be some artifacts caused by normals that don’t match the depth samples in some neighborhoods but hopefully the overall quality would be close to the quality I achieved with the normal buffer downsampling.

But this didn’t happen. 🙂 The classification result was really disappointing. There were too many artifacts, the discontinuity detection was varying depending on what was visible on the screen and sometimes it was dismissing whole surfaces (like the floor).

It was like the selected normals were random. And actually they were… And in order to select the normal that corresponds to the selected depth using offsets I would need a more complex shader: 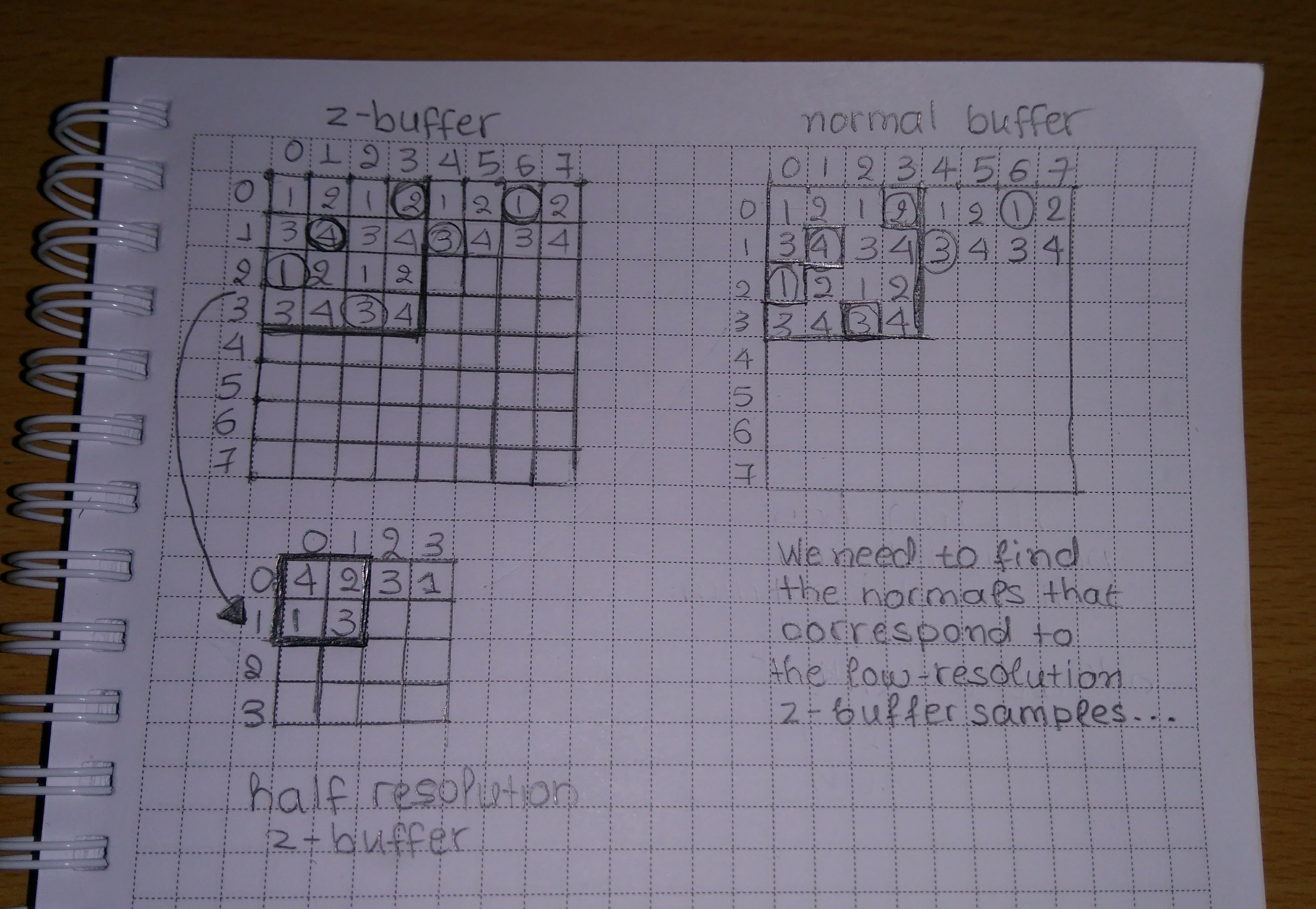 In the image above, on the left we see the z-buffer and the half-resolution z-buffer (suppposing that we perform SSAO in 1/2 resolution). Our downscaling algorithms so far (see part 1, part 2), select either the maximum or the minimum or both following some pattern like the checkerboard. Supposing that the circled samples of the z-buffer are the selected ones, the downsampled z-buffer contains a different sample of each 2×2 neighborhood of the original in each position: the one that is the max or the min depending on the pattern.

So, in order to find the normal that corresponds to that sample in the original normal buffer (the circled samples on the right) we would need to perform a similar depth comparison in the original depth buffer for each neighborhood of each sample. Then after having calculated the offsets and selected the normals N(3, 0), N(1, 1), N(0, 2) and N(2, 3) of the normal buffer, we would have to calculate their dots and select the minimum among them. This is already quite complex, similar to the downsampling we have already performed, and the complexity to select the correct sample increases while we lower the SSAO resolution and we change the radius of our search. So, at the end it’s faster and easier to just downscale the normal buffer.

I didn’t try to tweak this method further and see if I can select better offsets etc as it didn’t seem to have any significant performance advantage and the normal buffer downscaling clearly works.

And a note to myself: Replace that photo above with a proper diagram one day… :-p

So is that method really an improvement?

Well, with this method we certainly reduced the sharp artifacts and misplacements we’ve seen that a depth-based classification can cause (part 3.1). Also, it is an improvement compared to the depth-aware alone and to lerp alone. But there are still visible artifacts in 1/2 resolution (videos), so there must still be room for improvement.

In the images (1/4 resolution) and the videos (1/2 resolution) below, we can see some comparisons of combinations of lerp in the surfaces with nearest depth where we spot discontinuities.

The Max depth/Nearest depth and lerp seems to be an improvement here. Although there are still some visible artifacts.

Here, the methods seem almost identical… So, I would use the less expensive if I really cared about performance (max depth). If the difference in FPS is small (future post) I would probably prefer the checkerboard because in theory it preserves more information.

So far, my conclusions were the following:

Also, although there is still room for improvement and we can try to further reduce the artifacts (next post), the SSAO using Lerp on surfaces and Nearest depth on discontinuities is probably acceptable too:

In the next post of the series, I will talk about other ideas to improve the quality and compare them with the current one. I will also try to do some performance comparisons and see if reducing resources can further optimize the SSAO.

Like in the previous posts, I am appending the playlist with the videos used in the comparisons above in 1920×1080 resolution (SSAO is performed in 960×540) for those who want to examine the artifacts and the differences in detail: