Some GPUs support the ETC2/EAC images natively. This means that they can sample the ETC2/EAC textures that have been previously generated by either compressing non-compressed pixel data (glTexImage) or by loading already compressed data (glCompressedTexImage) to render the images. Older GPUs, including some Intel Generation 7 (Haswell, Ivy Bridge) and some older ones like the Sandy Bridge lack this native support in the hardware. For these older GPUs to be conformant with the standards, (and for the user programs to not crash on them), the support must be emulated in the software parts of the driver.

There are many approaches we could have followed to fix this problem, but we were looking for the less “invasive” one, that would affect the less parts of the driver. 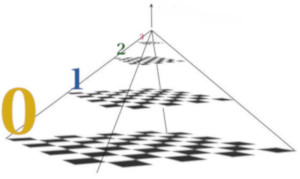 In case of mipmap textures, the driver will use a different level for each image of the mipmap pyramid.

In the i965 driver we store the textures as miptrees. The miptree is the struct that contains (or points to) all the information that is needed for the texture mapping to work (that is information about the color, the format, the dimensions, the number of levels and slices, the way the pixels are packed or unpacked, the tiling, the offsets, the usage and more). For the ETC/EAC textures, there was an extra field that was storing the original format of the texture before the decompression took place.

The driver might map the pixels that correspond to a miptree level/slice on a surface (or a buffer) for different purposes. Sometimes the mapping is done for reading: for example when the user requests the pixels back using a Get function, or when he wants to copy a region from the texture (pixels need to be read from source before they are copied to the destination), or when the driver performs an operation that involves reading pixels e.g. a compression or decompression. Some other times the mapping is done for writing, for example when a miptree slice from a level needs to be updated or modified because the corresponding image or a subregion of that image was the destination of a copy or conversion operation. 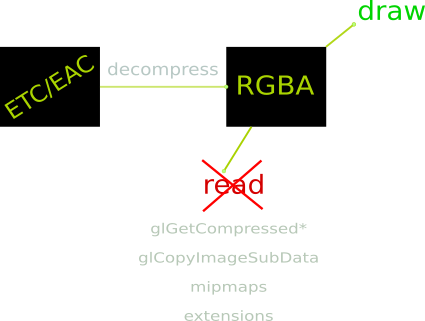 After that, every time that the compressed miptree is modified or filled with new data, the driver flags it in order to update the shadow tree accordingly before rendering. And so, before every draw call that involves compressed ETC/EAC textures on Gen7 GPUs, the driver checks if their miptrees have been flagged, and if so, it decompresses the pixels of their levels/slices filling the corresponding shadow miptrees. Then it sends the shadow miptrees to the GPU. 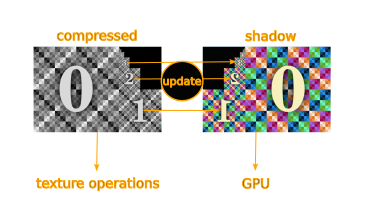 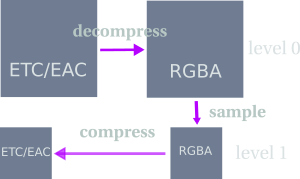 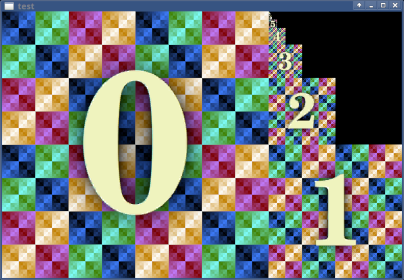 The first test displays it as it is and then reads back the compressed data by calling glGetCompressedTexImage2D to compare them with the submitted ones. 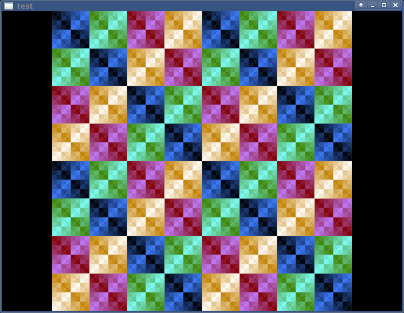 The third test copies a yellow quad region from the texture in its upper left corner, and overwrites a red quad, by calling glCopyImageSubData. 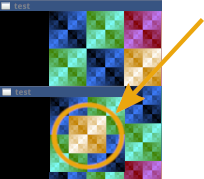 My initial idea to fix the emulation was to do a quick and “simple” hack: store the compressed data in a secondary tree as at the time we were using a tree with decompressed data as main, leave the rest of the code as it is and use flags to decide which one I should map every time that a map takes place. This “quick hack” required changes in the higher level i965 image functions that I managed to avoid in the final solution.

The idea to use a generic purpose secondary miptree to emulate different formats that we can’t sample, came from Nanley Chery who used this type of shadow miptrees in his r8stencil and ASTC formats emulations and who also reviewed my final patch series.

I’ve also received some help from Kenneth Graunke with whom I had discussed the problems I faced in my previous design and who suggested that I enable the OES_copy_image extension after I finish the work on the ETC/EAC support.

Finally, many people from my team (Sam, Alejandro, Iago, Andrés and Juan) made useful remarks during my previous attempts to fix the problem.

2 thoughts on “i965: Improved support for the ETC/EAC formats on Intel Gen 7 and previous GPUs”